Post Grant Review (PGR) has technically been available as an option since September 16, 2012. But since only AIA patents are eligible for PGR, it wasn’t until 2015 that PGR-eligible patents began appearing in significant numbers. Today, many of the patents that issue are eligible for PGR. Although the number of PGR petitions filed each year is increasing, the total number of petitions filed (30) remains quite low. 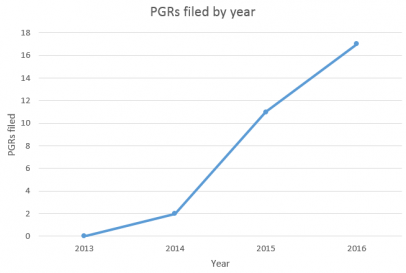 Below is a quick summary of the PGR petitions filed to date:

One PGR petition was filed. But it was filed as a PGR by mistake. It was dismissed and refiled as an IPR petition.

2014:  2 petitions (both settled before institution)

Two PGR petitions were filed. One of the challenged patents involved the toy industry (a device for making bracelets), the other involved the pharmaceutical industry (an anti-nausea drug for use with chemotherapy). Both PGR proceedings settled prior to institution.

Eleven PGR petitions were filed in 2015. One was denied institution because the patent was found not PGR eligible. The remaining ten petitions were instituted, at least in part. One settled after institution, and two recently resulted in final written decisions (1st decision, 2nd decision). The two patents that resulted in final written decisions were related to one another. Both were directed to the business of cattle ranching and, specifically, to determining “relative market value” of a sale group. All claims were found to be unpatentable under § 101.

Seventeen petitions have been filed in 2016 (through July 25). Most have not yet reached an institution decision. Of the three PGR petitions that reached institution decisions, two were denied (one because the patent was found not PGR eligible, one on substantive grounds) and one was instituted solely on written description grounds.

So far, PGR proceedings have been good for petitioners. Of the 13 petitions that reached institution decisions, only one was denied on substantive grounds. And, as for final written decisions, petitioners are winning the PGR war 2-0. It will be interesting to see if the number of PGR petitions continues to increase. In order for that to happen, the PGR success rate will likely have to continue to favor petitioners. Additional clarity on the actual scope of estoppel for arguments that a petitioner “raised or reasonably could have raised” wouldn’t hurt either. If PGR petitioners keep winning, however, the issue of petitioner estoppel may not be resolved by the courts for some time.

Note:  PGR is distinct from “transitional” PGR for Covered Business Method Patents, which is usually referred to as CBM. Although CBM is guided by many of the same statutes, it is different from PGR in many significant ways. For example, CBM proceedings are more restricted in who can file petitions (only those sued or charged with infringement), what patents can be challenged (only those relating to financial products or services), and have more limited petitioner estoppel (only covers grounds actually “raised”).