Mild discouragement of combination, without evidence of inoperability, does not amount to a “teaching away”

Do references that show different—but not mutually exclusive—manners of displaying information “teach away” from using both manners together? Unless there are express statements discouraging the combination or evidence of its inoperability, the answer will likely be “no.”

In Meiresonne v. Google Inc., the Federal Circuit affirmed the PTAB’s finding of unpatentability of all challenged claims in IPR 2014-01188. The claims were directed to computer systems with a “keyword results displaying web page” that displayed (1) a list of links, (2) descriptions relating to the links, and (3) a “rollover viewing area.” 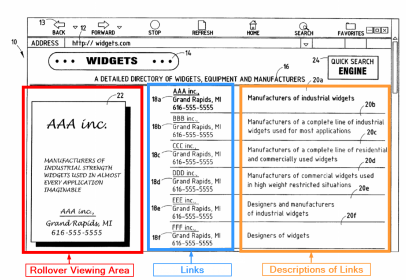 We are not persuaded that Finseth disparages the use of descriptive portions sufficiently for us to conclude that Finseth teaches away from the claimed invention. Rather, we read Finseth as providing an explanation of how to provide visual representations of web pages that can be used to enhance search results presentations. We do not read Finseth as suggesting that these visual representations should replace all other types of search results, such as Hill’s descriptive portions. Notably, although Finseth describes the descriptive text of the time as “cursory,” and describes the graphical preview as being more useful to the user, we do not see why a person of ordinary skill in the art would have read the reference as discouraging the particular solution recited in the claims, i.e., using both (even though one may be more useful than the other).

The combined approach does not render the resulting system inoperable:  “Here, neither Hill nor Finseth indicates that inclusion of descriptive text would detract in any way from Finseth’s goal of using a rollover viewing area to peruse data ‘much faster’ than previous methods and ‘determin[ing] which web pages would be of most interest to the user.’ … Text descriptions—even if cursory or cryptic—and graphical previews both help a user to determine whether a link is relevant to the information he is looking for. And nothing in either reference indicates that descriptive text would render Finseth’s rollover area inoperative for its intended purpose.”