The United States Supreme Court heard arguments this Wednesday in a case involving a federal trademark application filed by the Oregon band “The Slants.”

As discussed in an earlier post, The Slants’ application for a trademark registration for the name of their band was denied by the United States Patent and Trademark Office (PTO) because it determined that the term “slants” is disparaging to Asian people. The Slants appealed and the Federal Circuit reversed, finding the non-disparagement portion of the federal statute unconstitutional. The PTO appealed to the Supreme Court.

During the oral argument, several justices appeared to question the law’s constitutionality. Justice Breyer challenged the PTO’s assertion that a valid objective of the law was to prevent distractions, Justice Kagan raised questions of viewpoint discrimination, and Justice Ginsburg raised the issue of vagueness. Some quotes from Justices Breyer and Kagan are provided below:

JUSTICE BREYER: The only question I have for you is what purpose related to trademarks objective does this serve? And I want to be sure I have your answer. Your answer so far was, it prevents the — or it helps to prevent the user of the product from being distracted from the basic message, which is, I made this product.

I take it that’s your answer. And if that’s your answer, I will — my follow-up question to that would be, I can think probably, and with my law clerks, perhaps 50,000 examples of instances where the space the trademark provides is used for very distracting messages, probably as much or more so than the one at issue, or disparagement. And what business does Congress have picking out this one, but letting all the other distractions exist?

JUSTICE KAGAN: So, for example, let’s say that I wanted a mark that expressed the idea that all politicians are corrupt, or just that Democrats are corrupt. Either way, it doesn’t matter. I couldn’t get that mark, even though I could get a mark saying that all politicians are virtuous, or that all Democrats are virtuous. Either way, it doesn’t matter. You see the point.

At the same time, several justices also appeared to question whether the law was properly struck down as unconstitutional. Justice Sotomayor questioned how the denial of their trademark application actually burdened The Slants’ ability to express themselves. She noted that, even though The Slants were not granted a trademark registration, they could still call themselves The Slants and sue other bands if they used the same name. Other justices expressed skepticism that trademark registrations should be treated the same as free speech in a public park. Some quotes from Justices Sotomayor and Kagan are provided below:

JUSTICE SOTOMAYOR: Then I have a question for you. This is a bit different than most cases. No one is stopping your client from calling itself The Slants. No one is stopping them from advertising themselves that way, or signing contracts that way, or engaging in any activity, except that stopping someone else from using the same trademark. But even that they could do. Because you don’t need a registered trademark to sue under the Lanham Act’s entitlement for the confusion of the public in the use of any kind of registered or unregistered mark. If another band called themselves Slants, they would be subject to deceptive advertisements because they wouldn’t be this Slants.

JUSTICE KENNEDY: You want us to say that trademark law is just like a public park — the public park, a public forum, the classic example of where you can say anything you want. We treat this — we treat trademarks just like we treat speech in a public park. Thank you very much. Good-bye. That’s it. That’s your argument.

MR. CONNELL: It — it is my argument. I think the limitation on that, as I said before, are the categories of historically prescribable speech.

JUSTICE KAGAN: Well, Mr. Connell, this can’t be right, because think of all the other things, the other — I mean, I’ll call them content distinctions because they are — that trademark law just makes.

So there is a big difference. You are asking the government to endorse your name to the extent of protecting it in a way that it chooses not to. So it — there is a reason why the argument’s appealing. And why shouldn’t we consider it in those ways when your speech is not being burdened in any traditional way?

As with its other cases, the Supreme Court’s decision on this case can be expected anytime from within the next few months to when the Court recesses for summer.

In the meantime, The Slants appear to be having some fun with the controversy. They have titled their new EP “The Band Who Must Not Be Named.” Below is an image from the band’s Twitter account reflecting the same phrase. 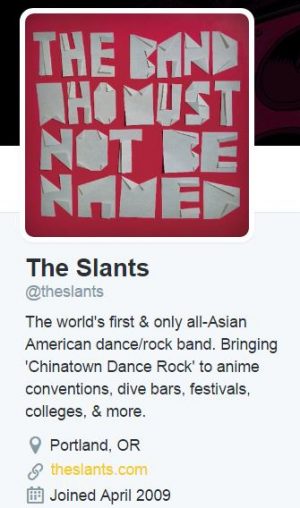