Inventor of self-cleaning home, and former Klarquist client, passes away at 101

Frances Gabe, an Oregon inventor and former Klarquist client, was profiled in a New York Times article earlier this week. Ms. Gabe passed away on December 26, 2016 at the age of 101.

The Times article is a fascinating profile of a truly unique woman that invented and constructed a self-cleaning house. Ms. Gabe’s invention and home were featured in many major newspapers and magazines in the 1980s and 90s, including the New York Times, The Guardian, and People Magazine.

According to the Times article, the idea for her self-cleaning house arose when Ms. Gabe decided to clean fig jam from the wall of her home with a garden hose. Taking that idea to the next level, Ms. Gabe converted her own home in Newberg, Oregon, into a working (mostly, at least) self-cleaning home. A video from 1990, by KGW News, shows Ms. Gabe’s self-cleaning home in action.

Ms. Gabe also patented her invention. In 1980, nearly forty years ago, Klarquist filed a patent application on her behalf disclosing a complex home-cleaning system that included:

The figure below is of a floor plan for a self-cleaning building construction that was disclosed in the issued patent. 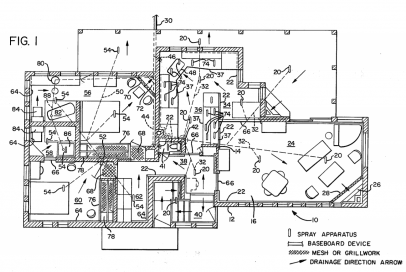 Although Ms. Gabe’s invention received much publicity, it never became a commercial reality. I think it’s fair to say, however, that many of us would love to see her vision for reduced housework realized someday. Until then, the “Background” description in her patent will remain generally true:

Although the average home or building is provided with various laborsaving devices, very little progress has been made toward automation of the basic cleaning of the building itself. Thus, cleaning of wall, floor and window surfaces as well as counter tops, table tops, plumbing appliances and the like involves a great deal of hand labor, with the basic cleaning functions consuming a considerable proportion of the average homemaker’s time. In addition, appreciable time is expended in the washing of clothing, dishes, and the like even with the aid of conventional apparatus designed for the purpose.

Our condolences to the family of Ms. Gabe on her passing.